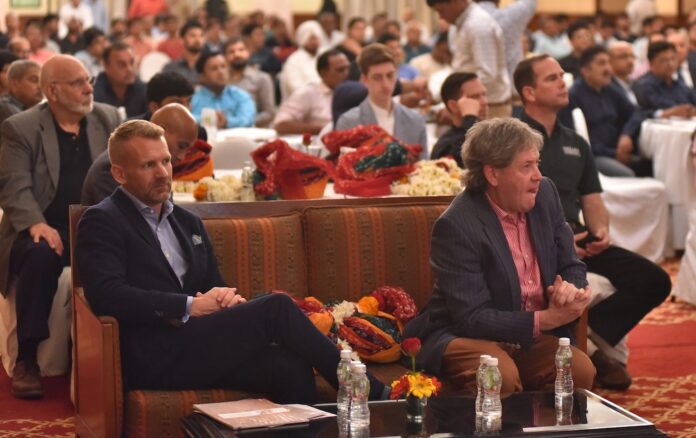 Members of the American Hardwood Export Council (AHEC) recently visited furniture factories in Jodhpur and met the city’s leading manufacturers. AHEC also hosted around 200 members of Jodhpur Handicrafts Exporters Association (JHEA) at a mini-convention, where its experts gave presentations about American hardwoods and their environmental credentials.

According to AHEC, through this visit its members were able to understand the challenges of Indian furniture makers with regards to timber requirements, and explore opportunities for increased use of American hardwoods, particularly for products destined for exports from India. During this organised interaction, they displayed samples of major species and answered questions on lumber grading, kiln-drying, the significance of environmental credentials and applications. The event provided a forum for the Jodhpur handicrafts sector to meet members of the US hardwood industry and discuss ways of working together.

“There is absolutely no doubt that India offers massive potential for the consumption of American hardwoods across many different sectors and both for domestic and export manufacturing,” said Roderick Wiles, regional director, AHEC. He highlighted that Jodhpur is just one centre for the production of wooden furniture and handicrafts and there are others in Rajasthan, as well as in other states. “The scale of manufacturing is very significant, and the requirement for hardwood lumber is substantial,” he remarked, a fact further highlighted by Indian companies who attended the event and who expressed keen interest in starting to import and use American hardwoods for the first time.

The AHEC team visited furniture manufacturers, all of whom use significant volumes of hardwood lumber for the production of furniture and handicrafts being exported to the US, Europe, Australia and the Middle East. One of the critical challenges being faced by them is of decreasing traditional sources of wood, and a strong focus on avoiding any wood that might come from illegal sources from the perspective of the main consuming countries of North America and Europe. AHEC has suggested that an effective strategy to overcome these challenges is to manufacture products from American hardwoods, which are not only abundant but are also backed by the assurance of legal and sustainable production, and are well recognised in the main consumer markets.

The mini-convention reflects AHEC’s commitment to cater to and expand further in India, which has demonstrated a growing appetite for US hardwoods for several years. “While US hardwood exports to India remain very low relative to the potential size of the market, awareness is increasing, perceptions are changing, and demand is on the rise,” remarked Wiles. AHEC, he said, believes that this is an important time for the industry to redouble its efforts in India and to try to capitalise on what could be a turning point in the market. “With this opportunity in mind, AHEC fully intends to keep up the momentum in India in the coming months,” he shared. The Jodhpur event was a successful one, and AHEC is looking to host a similar event in Jaipur in October, as well as participate in the MumbaiWood trade show, informed Wiles.