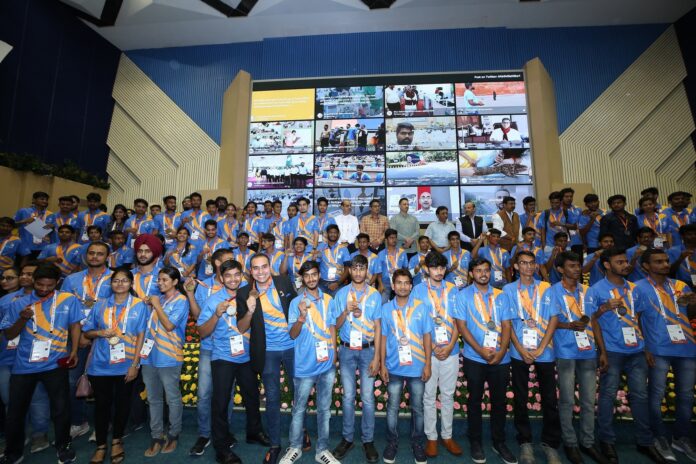 The national-level skills contest provided a platform for the youth to step up their competencies for becoming ‘future-ready’ professionals.

IndiaSkills, the country’s biggest skills competition designed to encourage and prepare the youth for the global stage, was held from October 2-6 in New Delhi. Over 400 competitors from 27 states demonstrated their competencies in 46 skills, seven traditional skills, and four demo skills, before experts and jury members, according to the organiser National Skill Development Corporation (NSDC). A total of 164 winners were awarded medals in their respective skill categories. Of these, 45 won gold medals, 47 won silver, and the bronze medal went to 43 winners. Maharashtra topped the medals tally with 23 medals, followed by Odisha, which had 21 winners. Karnataka and Delhi came third with 16 medals each, while Chandigarh finished in the fifth position with 12 medals. Over 15,000 visitors attended the competition.

According to NSDC, more than 50,000 youth registered for IndiaSkills 2018; 500 competitions were held across three months at the district and state levels. In keeping with the norms of the WorldSkills International competition, each skill category had three winners of the gold, silver and bronze medal. A new addition has been the Medallion of Excellence that was awarded to competitors who scored more than 700 marks.

Also, IndiaSkills 2018 introduced four new skills. Referred to as demo skills, these categories are hotel receptionist, cybersecurity, cloud computing and water technology, skills that have been included with an eye for preparing the youth in “future-ready” professions.

Anant Kumar Hegde, the Minister of State for Skill Development & Entrepreneurship, said, “Education gives you knowledge, but skill development will help you earn your livelihood. Your skill is your life, live it with pride. The winners of IndiaSkills 2018 will be the flagbearers of the tricolour at the WorldSkills in Russia next year. I urge you to give your best and win many more laurels for the country.”

Added filmmaker and chairman of Media and Entertainment Skills Council (MESC) Subhash Ghai, “Be a jack of all trades and master of one. Each one of our youth is creative, but it’s just that we have not been nurtured in the best way and our talent has not been harnessed in a formal environment. Skill India is an opportunity for you to hone a skill of your choice and do your best in life.”

The event hosted several engaging initiatives for the youth such as career counseling, skill exhibition, and try-a-skill, among others. Also, the state ministers’ conference, skill conclave, and industry roundtable were organised on the sidelines of the skill competitions.

IndiaSkills received support from corporate India, with Ola awarding a cash prize of Rs 20,000 to the gold medalist in auto body repair and automobile technology category. Axalta Coating Systems gave away a cash prize of Rs 25,000 for sustainable practice award in car painting. The event also saw Paytm awarding insurance up to rupees one lakh to all gold and silver medalists for IndiaSkills trades.

The Ministry of Skill Development and Entrepreneurship, in close conjunction with industry, will work towards preparing the winners on best practices before they head to the 45th WorldSkills competition at Kazan, Russia in 2019. India won one silver, one bronze and nine Medallions of Excellence and ranked 19th among 56 countries at the last WorldSkills 2017 in Abu Dhabi.

ALSO READ: Plumbing Skills Council aims to Deliver a Plumber to Every 1,500 Persons