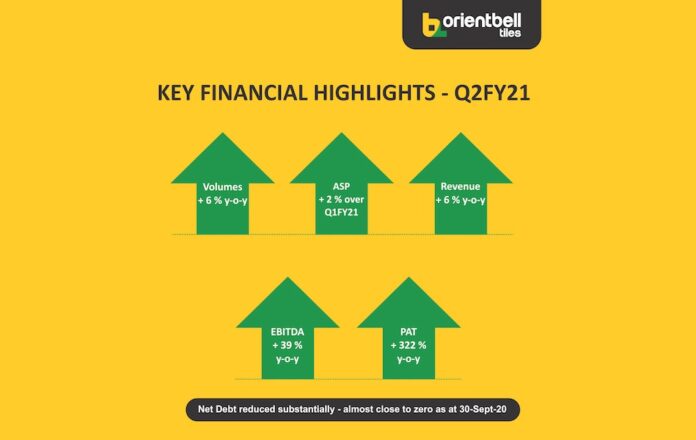 Tile major Orient Bell Ltd (OBL) has announced its unaudited financial results for the quarter ended September 2020. The company has recorded a topline growth up 6% y-o-y, which is led by a renewed focus on new products, displays, and channel engagements, the company said in a press release.

OBL has also said that its EBITDA margin is up 8%, which is attributed to “concerted” efforts on cash fixed costs and improvement of consumption KPIs. It added that its EBITDA loss of Q1FY21 is recouped fully during Q2FY21. During the quarter, the company has “strongly” focused on working capital management and “significantly” improved Days Inventory Outstanding (DIO) and Days Sales Outstanding (DSO).

In Q2 FY 21, the company initiated its “first-ever” digital launch of new products, including germ-free tiles for wall and floor, high gloss germ-free tile – Sparkle series in 300X450 size, high-depth elevation tiles in 300X600 size, among others. Besides, it added new Orient Bell Tile Boutiques by 25, thereby increasing the count to 188.