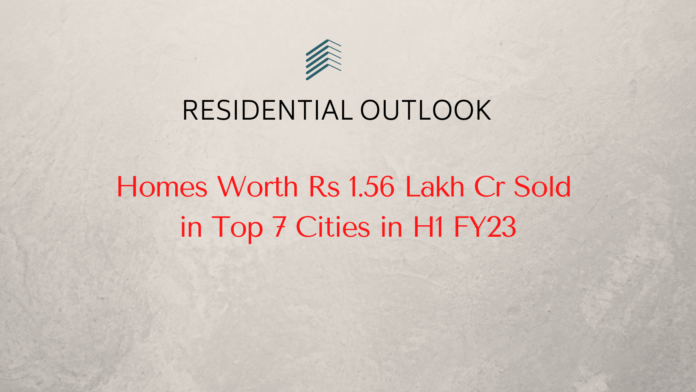 Approximately 1,73,155 homes were sold across the top 7 cities in the first two quarters of FY23, against 87,375 in the corresponding FY22 period

Our residential outlook shows that despite increased interest rates and basic property cost, the top 7 cities saw residential sales worth Rs 1,55,833 crore in the first half of FY23, rising yearly by 119%. The overall value of units sold in the corresponding period of FY22 was approximately Rs 71,295 crore.

In H1 FY22, NCR saw total housing sales worth Rs 8,896 crore. Approximately 52,185 homes were sold in MMR in the April-September period in the ongoing fiscal, while NCR witnessed sales of approx. 30,300 units in the same period. MMR dominated housing sales both in volume and value terms, followed by NCR and Pune.

Kolkata and Chennai saw homes worth Rs 4,774 crore and Rs 4,709 crore sold respectively in the first two quarters of the ongoing fiscal, rising by 115% and 57% annually.

The data vouchsafes that the first half of FY23 was a highly upbeat period for the residential market in the top 7 cities, allying fears that housing sales could be impacted by rising property prices and interest rates. The numbers show that Diwali came early for developers, with homes worth Rs 1.56 lakh crore sold across the top 7 cities in H1 FY23.