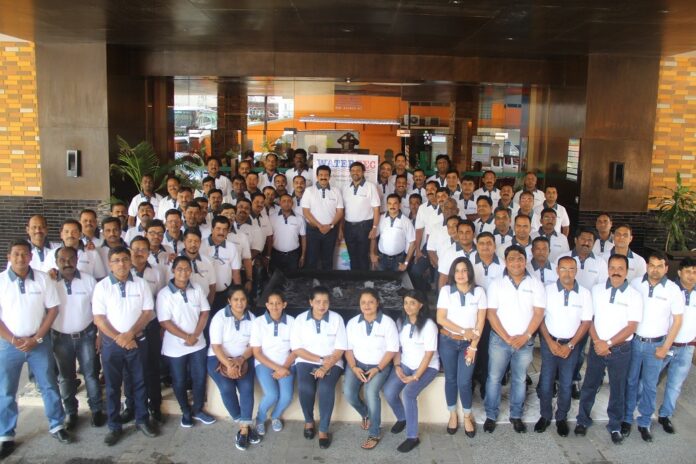 CEO Baliga is faced with a rather stiff target, and he needs to reinvigorate every single operation of the company to succeed. And he believes he is quite on target

In 1997, when Watertec India was incorporated as a JV between UMS Group, Malaysia’s Watertec and Sri Lanka’s South Asian Investments, the founders wanted to feed the demand of India’s growing neo middle class for stylish and high-performance products at budget prices. They decided to offer manufactured-in-India ‘designer’ bathroom fittings made from virgin grade engineering polymers that were durable and added oomph to bathrooms. Though they were not the first to provide such products, their ambition was to build Watertec as the finest plastic tap maker in the country.

By 2010 the company had developed enough confidence and traction to start having higher aspirations. By identifying its core competence as the conversion of polymer into value-added products, the Watertec management decided to diversify into the pipes and fittings category. In 2013, the company launched a range of CPVC and uPVC plumbing pipes and SWR pipes and fittings. This step was logical since pipes and taps were synergistic in terms of point of sale and time of sale.

But the founders knew that if Watertec had to enter the big league of the building materials industry, it needed to get into higher-value categories. Such categories are usually driven by high octane branding, rapid launches, innovation and the like, requiring agile and youthful teams and an equally adept professional leadership. Once decided, Watertec’s board lost no time in starting the search for a chief executive officer who could lead the company along a new path and towards a higher growth trajectory. They were looking for a person who understood the building products sector, particularly bathroom fittings, and who had driven initiatives successfully while in leadership positions at professionally run organisations. Enter Bantwal Ramesh Baliga.

When Baliga joined Watertec as CEO in April 2016, his first task was to present a 5-year game plan to the founders. But since he nurtured a strong entrepreneurial streak due to his extensive experiences of project management and market expansion, Baliga already had a plan. He told them that he wanted to transform Watertec from a polymer products company into a bathroom solutions provider, by foraying into metal bath fittings and sanitaryware. He envisaged that Watertec would be an aspirational brand representing quality, latest design and manufacturing excellence, and would connect with its customers through best practices in retail. Also, from Rs 195 crore in 2016, the company’s turnover would rise to Rs 600 crore by 2021.

When Baliga met us for this interview, he said, “The work culture of Indian and global brands are quite different. Global brands pursue a systematic approach to business ethics. I have incorporated this work culture into our organisation.” He meant that he had set out to reconfigure almost every bit of business operation in the company.

His first mission was to strengthen Watertec’s manufacturing muscle. This he did by embracing Industry 4.0, or the fourth industrial revolution that focuses on interconnectivity, automation, machine learning, and real-time data. “We have completed the Industry 4.0 version of new automated bath fittings unit with the latest technology. We will be doing the same for our pipe fittings division, which will entail expansion of capacity as well,” he said. Baliga wants Watertec to grow as a market leader in the bath fittings and plumbing market, which is demanding performance-based solutions and materials in the face of increasing environmental concerns. He said that for any organisation to be a leader, it was imperative to imbibe a culture of manufacturing excellence and stay ahead of the technology curve.

Read other parts of the story:

My People Are My Power: Watertec CEO Bantwal Ramesh Baliga

To pivot from polymer to metal, Baliga steered Watertec into two crucial partnerships. The first was with the Thailand-based stainless steel stalwart VRH Group which manufactures faucets and shower accessories in 304-grade stainless steel. The other was with German water management major Conti Sanitärarmaturen GmbH, a technology and design specialist offering solutions for public, semi-public and commercial washrooms. “We work on sales, marketing and post-sales service for pan-India with both the companies. The products of both companies are unique for India and are being introduced for the first time,” he said. Through these tie-ups, Baliga hopes to speed up Watertec’s shift to higher-value metal-based business, and also make a mark in the specifier segment which is at a nascent stage in India.

The R&D department was spurred into action, tasked to develop new designs and finishes for the polymer range of bath fittings. Within a short span, the faucets range was expanded to include nickel-chrome plated versions. After that concealed and exposed bath and shower mixers in CPVC were launched, also with chrome finish. According to Baliga, this is a one-of-its-kind product in the industry.

After putting in place a pipeline of new products and categories, Baliga set out to build a strong retail and distribution channel that would handle the higher-value offerings. “Channel partners are the core strength of any company,” he says. “At Watertec, the number of our channel partners has grown to 15,000 across the country. They do business with us worth between Rs 10,000 and Rs 6 crore every month. Most of them have been with us for the last two decades; very few would have parted ways. This shows how much we care for them and the value they see in being associated with Watertec. They are our ambassadors.”

Indeed, says Anil Kumar Balakrishnan, the company’s channel partner of Thiruvananthapuram-based Kalinga Traders. “We have been a dealer of Watertec for the last 15 years. We became their distributor two years ago after enjoying a satisfying relationship. The company does not change its policy now and then, unlike many others. This also allows us to serve our customer in a better way.” Echoes Binu of Kollam’s Surya Distributors; “We have been associated with Watertec as their channel partner for three years. We are happy to sell their good quality products.”

But he is not letting channel partners do all the talking for the company. Instead, Baliga wants buyers of bathroom fittings to experience Watertec’s quality and innovation at company-owned display centres which he intends to set up pan-India.

“The outlets of most of our existing dealers are like hardware shops which do not afford sufficient display. However, the new ranges that we are bringing would require displays of a higher calibre in terms of space and aesthetics. While we will be working with our partners to upgrade their displays, we will also establish display centres to provide orientation to high-value customers and consultants. These display centres would provide support to the neighbouring dealers in terms of customer leads, as well as guidance on visual merchandise practices.”

The first centre was launched in Coimbatore, and Baliga is scouring the country to identify suitable locations in Chandigarh, Mumbai, Bengaluru, Chennai, and Kolkata. Earlier in July, he closed the site for the Delhi NCR centre. Stating that the Watertec dealer network was strongest in the south and east, quite strong in the west, and weak in the north, he confirmed that the display centres would be ready by March next year.

Baliga has also ticked other boxes on the checklist – strengthening relations with influencers including architects, designers and consultants; approaching leading builders; initiating BTL engagements like plumber meets and exhibitions; and launching branding campaigns in lifestyle and trade media. A new, dynamic website has been launched, and the presence of the brand marked on all major social media sites. An app will be launched soon for android and iOS mobile platforms.

Before Baliga’s joining Watertec, the founders had set the company on a zero debt-to-equity ratio trajectory. Under his watch, Watertec has already realised this goal and is a CRISIL-rated A+ company. But Baliga has set a more challenging target of Rs 1,400 crore in turnover in the next five years, which comes to a CAGR of 30%. He said that this target was achievable, considering that Watertec was entering segments that would afford it greater growth potential. We discovered that he was already beating the industry hands down with a CAGR of 23%. What needs to be seen is how he will sustain this scorching growth, and achieve the tough goals he has set for the company and himself.

My People Are My Power: Watertec CEO Bantwal Ramesh Baliga