‘Transparency is the New Leadership Imperative…’ 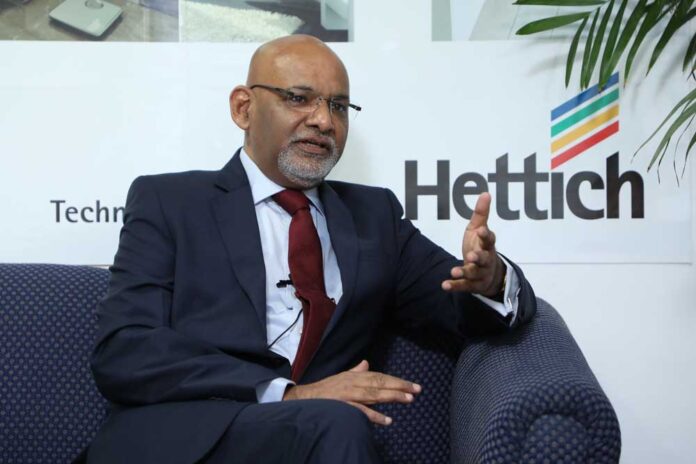 Anil Kumar Goel has been at the helm of Hettich India for the better part of two decades and the company has, in this period, captured pole position in the furniture fittings sector. Goel himself has proved to be a strategic leader who can manage complexities while keeping an eye on the future. Some of his initiatives are notable and have in fact shaped the industry. He embedded carpenter training into Hettich India’s DNA much before the industry realised the perils of the yawning skill gap, he set up the industry’s first experience centre which eventually popularised the concept of display centres, and he sewed up partnerships with furniture e-commerce start ups early when they needed validation the most. He speaks about a few hot issues and his favs…

Demo Squeezed Liquidity, GST a ‘Psychological’ Phenomenon
Demonetisation had resulted in a dramatic contraction of money supply in the hands of people of all strata. That is why customers were not willing, or should I say unable, to pay and retail stores witnessed significantly lesser footfall. So, there was a dampening effect on market demand across industries. But, this was a short-term impact.
GST on the other hand had a psychological impact which resulted in reduction of demand. The moment customers saw a flat 28% addition to their invoices on account of tax, their mindset changed. They felt that they were paying a higher tax, although they had been paying the same quantum of tax earlier in form of 14-15% VAT and 12-13% excise duty before GST implementation. This affected consumption, and consumers started buying goods in limited quantities. But with the revised GST rate of 18%, demand will gradually increase.

GST a Boost for ‘Make in India’
The biggest positive impact of GST will be on domestic manufacturing; it will encourage local production as imports will become costlier. Prior to implementation of GST, it was more profitable to import products by paying duty and CVD on import value and zero tax on account of value addition. Today, no industry can be internationally uncompetitive and domestically competitive. One can bring any material from anywhere in the world and export anything. So, domestic production has to be competitive internationally. The new taxation system will indeed boost the government’s ‘Make in India’ programme.

Hettich is “Definitely Growing”
The impact of GST cannot be manifest in a day or two; it will take longer to become fully visible. When one is making structural changes, and that too in a vast and diverse country like India, it takes some time for things to settle down. Hettich is growing consistently, so there is no demand contraction per se. Our sales have grown in value and volume terms. In fact, volume growth has been higher than value. Demo did not cause any reconfiguration of our supply chain, except for having to support some dealers or distributors, and GST did not impact us. In fact, we marginally decreased our costs rather than increasing, and even reduced MRP to pass on the benefit of rate reduction.

Affordable Housing will Drive Low-cost Hardware
The ‘Housing for All by 2022’ agenda is primarily driven by the need for affordable housing. However, since the affordable housing units will be smaller in size, space utilisation therein combined with functionality will take priority over other factors. Therefore, the demand for low-cost hardware, which is cost-effective as well as which creates more room, will grow. Another likely change will be that many housing units which are lying vacant at the moment might be put to effective use with greater urgency by renting or selling, which will result in the increase in demand for furniture in general.

Modular is the Future
The size of the Indian furniture industry is estimated to be Rs 1,00,000 crore, out of which the modular or mechanised segment is not even 10%. The industry is moving towards modularity as consumers are beginning to understand the benefits of owning standardised furniture. E-commerce platforms such as Pepperfry, Urban Ladder and Livespace have also played a role in creating awareness about modular furniture, particularly because their own profitability depends on standardisation. Besides, Ikea is sure to boost demand for well designed and quality furniture which is very competitively priced, once it sets up its outlets in the country in the coming years. Ikea is known for beating down costs through the smart design of products as well as the processes. Its foray will also offer unique experiences to buyers as they will be able to assess if they want to buy a free-standing single drawer unit or a complete kitchen. These developments will call for massive steps towards standardisation of kitchens and furniture for mass consumption, and naturally they augur well for the industry.

‘Experience’ is the Retail Mantra
Customers across the world are craving for smart and intelligent living solutions. They want ideas for designing their interiors. In light of this trend, companies will have to offer new and innovative experiences to their buyers. They will have to carefully review the customer experiences every time he comes in contact with their brands. They will have to reinvent themselves by creating retail spaces that engage and immerse the customers into very pleasant experiences, which are unmatched by online or digital shopping.

The companies that have realised this paradigm are pumping monies for building spaces that are commonly referred to as display, design, experience or innovation centres. These are not conventional points of sale (POS); rather they are touch-and-feel points that influence the buying or decision-making process of customers and help in generating sale leads.

We launched our first Innovation Centre a couple of years ago at Bengaluru. It showcases our most premium fittings and applications for modern furniture and addresses customers as well as designers. Visitors to this centre need to take a prior appointment for personalised attention. Besides, we have also established display centres in Delhi, Mumbai, Bengaluru, Kolkata, Lucknow, Hyderabad, Chandigarh, Indore and Chennai for architects, designers, contractors, OEMs and carpenters. These centres also provide inspiration to our channel partners so that they too can connect with their customers in a more evolved manner.

Failure is a Part of the Leader’s Journey
A leader has to be a visionary. I believe that the vision with an actionable strategy can realise the goal of an organisation and at the same time meet the demands of the market. This differentiates a true  leader from me-too leaders. However, success does not come merely because one has a vision. One has to craft a sound strategy around the vision, have actionable plans, and more importantly engage people. The calibre can be gauged by the leader’s ability to align employees’ actions with the course of implementation of plans and priorities that the top executive has established in the strategic planning process.

Failure too is a part of the leader’s journey; it is not success all the way. One has to be ethical and transparent in business dealings. In fact, trust and transparency are probably the most important fundamentals of leadership that stand between ordinary results and extraordinary results. For me, transparency is the new imperative. We at Hettich believe in extraordinary results, and thus abide by the principles of trust and transparency. As far as the leadership position of Hettich India is concerned, I have been getting tremendous support from the global leadership team. I have shared with conviction our vision and actionable strategy with the global team, and more often than not they have fully backed our decisions.

As a perpetual student of leadership, I am inspired by Dhirubhai Ambani who made Indian industry globally competitive by setting up exceptionally large-sized projects, and Ratan Tata who acquired global corporations and turned them around. Of course I have much admiration and respect for the many other Indian managers who are setting benchmarks through their audacity and integrity. ')}