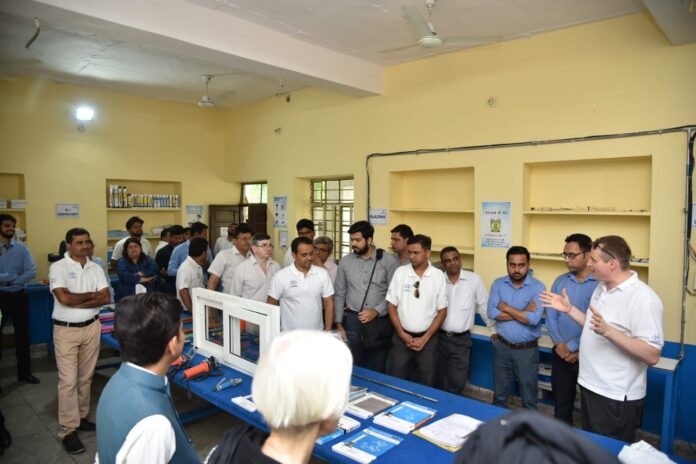 The skill development centre will train the youth in the skill sets required for fabrication of uPVC windows and doors.

Bhiwadi (Rajasthan): In a step to close the skilling gap that exists in the domestic uPVC fenestration industry, uPVC Window and Door Manufacturers Association (UWDMA) on Monday inaugurated its maiden skill development centre, here. Called UWDMA Skill Development Centre (U-SDC), it will train the youth in the skill sets required for fabrication of uPVC windows and doors. The facility has been set up at ITI Bhiwadi with the support from the Government of Rajasthan.

“The association has conducted numerous workshops across India to promote uPVC windows and doors at various forums. The members had been planning to set up a neutral training facility for quite some time, where students can be taught the right way to make uPVC windows. The Government of Rajasthan and IGVET have been very helpful and provided us space at ITI Bhiwadi to start this first Center,” said UWDMA president Mario Schmidt (Left in the Below Image). “U-SDC is a one of its kind centre with 100% funding from the members in the form of machines, profiles, hardware, steel, money, manpower and facilities to conduct practical sessions.”

Elaborating about the course structure, he said, “Total duration of the course will be six months and the first batch will constitute of more than 10 students. During the tenure, students will be imparted training on production and installation of different types of uPVC windows and doors. Graduates of this course will be placed in member companies later on.”.

UWDMA secretary Satish Kumar, added, “This year, our goal is to train 45 students by the end of the year on uPVC window production and installation. This became possible with the support from the Government of Rajasthan, GIZ, German Embassy and esteemed members.”

The market size of the domestic door and window industry is approximately Rs 15,000 crore . Out of this, 10% share or roughly around 1,600 crore is uPVC door and window sector. uPVC doors and windows market is expected to grow at a CAGR of 7.0% during 2015-2020 and the major growth drivers for the industry are increasing new housing construction and replacement activities. The other tangible and intangible benefits are, uPVC doors and windows are thermal, water and wind-resistant. These door and window systems are corrosion-free and are energy-efficient which can save energy up to 25% to 30%, UWDMA said in a statement. ')}