G20 and the Private Sector 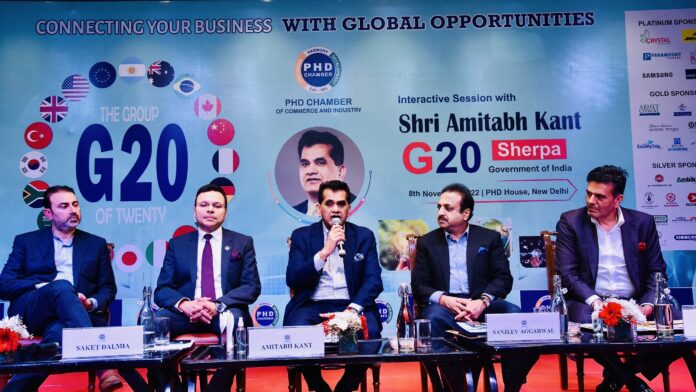 India is setting an agenda that could reshape the global narrative and businesses need to be ready for this paradigm shift, said India’s G20 Sherpa Amitabh Kant. While speaking at an interactive session organised by PHD Chamber of Commerce and Industries, Kant explained the linkages between G20 and the private sector and the significance of India’s Presidency.

G20 and the Private Sector – As India takes on the mantle of The Group of Twenty (G20) starting in December 2022, Prime Minister Modi has given to the world the theme of Vasudhaiva Kutumbakam – One Earth, One Family, One Future. This theme, along with the G20 logo showing the earth resting on a lotus, affirms the value of all lives – human, animal, plant, and microorganism – and their interconnectedness on our planet and the wider universe.

G20 is an inter-government grouping of 19 nations and the European Union, together representing the developed and developing world. The group accounts for 80 per cent of the world’s GDP, 75 per cent of world trade, 90 per cent of patents, and two-thirds of the global population.

Through its presidency, India’s message to the world is of striving for just and equitable growth for all in the world, as we navigate through these turbulent times, in a sustainable, holistic, responsible, and inclusive manner. The G20 theme and logo together represent a uniquely Indian way of living in harmony with the surrounding ecosystem. The inspiration comes from our ancient civilisation and our belief in the idea of unity in diversity.

In November 2021, at the 26th session of the Conference of Parties (COP26) to the United Nations Framework Convention on Climate Change held in Glasgow, India made the following national commitments (panchamrit):

The panchamrit along with the G20 Presidency theme and logo confirm that India aims to provide meaningful leadership and constructive guidance to the world community, instead of being a follower of international cues.

The world currently is faced with six key challenges – economic slowdown, spiralling debt, post-Covid impact, climate change, breakdown of global supply chains, and the Ukraine-Russia war. Prime Minister Modi has indicated that though the world is in the midst of chaos and crisis, there is an opportunity to be action-oriented and visionary. Asserting that it is not countries but individuals and communities that will make a difference in mitigating the challenges, he has declared that India will take the lead to:

The creation of digital public infrastructure has placed India in an advantageous position. Mobile networks, internet connectivity, direct benefit transfer, digital identity, and digital payments, all these together are transforming the way India is governed and making doing business easy. Through our unique public-private model (UPI, Fastag, Cowin), we have ensured data privacy along with innovation.

By herself, India has contributed little to carbon emissions. At 1.5°C, total carbon space availability is 2,400 gigatons, whereas India has utilised 52 gigatons. That’s just 1.5 per cent while we are entitled to 17.50 per cent. Yet, India has committed to not importing fossil fuel after 2047 and becoming the first country to not use fossil fuel.

Our mandate is to be the first to industrialise without carbonising. We made an early start by providing over 500 million LED bulbs to people and 340 million electricity connections to households. India has also pushed through a revolution of renewables. We have built renewables capacity of 160 GW, including 57 GW of solar energy. The renewables target for 2030 is 500 GW.

However, what is significant is that electricity accounts for 20 per cent of carbon emissions, with the rest 80 per cent coming from hard-to-abate industries like steel, cement, refining, fertiliser, transport, etc. For that, we have to crack water to produce green hydrogen.

We aim to become the world’s lowest-cost producer and a global production hub of green hydrogen so that hard-to-abate industries can start contributing meaningfully to climate mitigation. Today the cost of green hydrogen is $4.50 per kg, whereas we must bring it down to $2.00 per kg by 2026 and $1.00 by 2030.

The G20 Presidency for 2023 offers the industry an unprecedented opportunity to contribute to the global agendas in which India has taken lead. During the Presidency, over 200 meetings in 32 sectors will be held in over 50 cities of the country. These would include meetings with policymakers, scientists, technologists, investors, industry bodies, and international delegations. The Presidency will culminate with the G20 Summit, which would be one of the highest-profile international gatherings to be hosted by India.

The Presidency would be the ideal occasion to showcase our technological prowess, scientific thought, innovative spirit, indigenous knowledge, hospitality, art and culture.

Businesses across the board, from MSMEs to large organisations, should capture this opportunity to become an integral part of global supply chains in the new paradigm. The G20 is all about business, that’s why there is also B20 which itself will encompass nearly 100 events. For India to grow by 9 to 10 per cent over decades the private sector must grow 30 to 40 per cent annually, and the government is intent on achieving these thresholds. Therein lies the challenge and the opportunity.

G20 India Logo | One Earth. One Family. One Future.