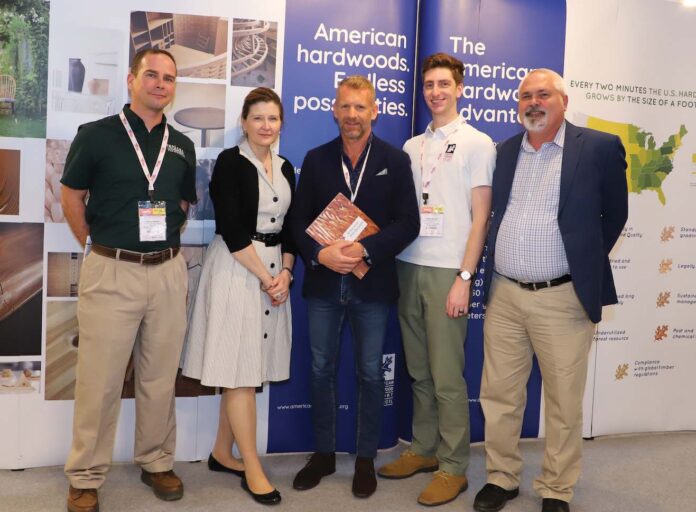 The American Hardwood Export Council (AHEC) is suggesting that Indian wood product manufacturers should convert to American hardwood so that are not on the wrong side of the laws of buying countries.

During a presentation at DelhiWood 2019 in Delhi–NCR, AHEC regional director Roderick Wiles stated that India is well placed to exploit the comparative advantages in global markets for wooden furniture and handicrafts. Backed by a strong woodworking tradition, high skills, and competitive labour rates, Indian manufacturers are gaining a strong international reputation for their ability to supply high quality and fashionable products at a competitive price, he noted.

“India’s exports of wood-based products, which mainly comprise wood furniture, more than doubled from $500 million in 2010 to $1.05 billion in 2017. Latest data indicates that exports increased a further 7% to around $1.13 billion in 2018,” shared Wiles. He further informed that last year 40% of exports were destined for the United States and 31% for the EU. “Much of the products exported to the US and the EU are sold to big corporations now being targeted by regulators and environmentalists in their effort to reduce illegal logging in wood supply countries,” he said.

According to Wiles, “To maintain their growth, Indian manufacturers have to deal with the related challenges of depletion of traditional sources of wood supply, and a strong focus on avoiding any wood products that might come from illegal sources in the main consuming countries of North America and Europe.” He suggested that an effective strategy to overcome these challenges is to manufacture products using American hardwoods, which are not only abundant but backed by an assurance of legal and sustainable production.

India’s wooden furniture and handicrafts sector relies heavily on locally-sourced hardwood species, the supply of which is restricted and there is growing competition for the wood that is available. Further, the introduction and tightening of laws making importers of all wood products, including furniture, liable to sanction if any illegal wood is identified in the products they sell, has intensified the competition.

Wiles suggested, “Indian manufacturers need to identify more efficient and politically realistic ways to satisfy the legal obligations of customers.” He explained that while the details of the various laws introduced in the US, EU and Australia differed, they all shared one critical feature – they are all risk-based. “The need to track wood to the individual forest management unit, or to seek FSC or PEFC certification of supply chains, applies only to those countries or regions where there is a risk of illegal harvest. If the risk can be shown to be ‘negligible’ at the national level, then there is no need to trace timber further than to the port of export from the supply country.”

This, he said, opens the door to a very simple solution for Indian manufacturers interested in expanding markets for their products in the EU and the US. “They should manufacture their products using wood imported from countries where there is a negligible risk of illegal harvest.”

AHEC states that that there is negligible risk of any US hardwood containing wood from illegal sources. “By using American hardwoods, Indian wood product manufacturers can transform laws like the EUTR and Lacey Act from a threat to their competitiveness, into a major opportunity,” says Wiles. He shares that US hardwood forests cover around 111 million hectares, equivalent to about one third of the entire land area of India, and the volume of hardwoods standing in US forests, which now exceeds 13 billion cubic meters, is expanding (after harvesting) at a rate of around 150 million cubic meters per year, nearly five cubic meters every second. “There is then a tremendous opportunity to combine Indian woodworking skills and styles with American hardwoods to produce globally competitive furniture products.”